Art Wolfe from the USA is one of the greatest and best known nature photographers and photo artists of our time. For more than fifty years, countless projects have taken him to the remotest corners of the earth. His photographs of natural wonders, animals and people have been printed in hundreds of publications and exhibited in museums and galleries all over the world. Since 1978, Art Wolfe has published more than 90 books of his own and been involved in numerous TV productions. “Art Wolfe’s work is overwhelming and breathtaking”, says famous actor and film director Robert Redford. And his colleague Morgan Freeman adds: “Art Wolfe is a virtuoso whose memorable snapshots emphasize, again and again, how absolutely essential it is to preserve the earth’s natural treasures.”

With his “Earth Is My Witness” project, Art Wolfe presents the highlights of his long experience in photography for the first time in a major retrospective. It is the most comprehensive presentation of his work that has ever been exhibited and it demonstrates his boundless curiosity about the world. The spectrum ranges from exotic themes in subtropical climes, such as a colorful camel market in the Indian town of Pushkar, to the most inhospitable regions on our planet including, for example, the moment at which a polar bear mother and her cubs leave the ice cave after hibernation.

Very few other photo artists can match Art Wolfe who, time and again, comes up with pictures which not only tell a gripping story, but also become icons. Perhaps it is his instinct for just the right moment, the perfect light, the creative use of state-of-the-art exposure technique, and the dialog with his subjects. Art Wolfe’s expertise is impressively demonstrated in the retrospective “Earth Is My Witness”.

The exhibition is an exclusive production by the Städtische Galerie Iserlohn and the Stadtmuseum Schleswig together with the artist. It opens on February 11, 2016 in Iserlohn where it will be open to the public until May 1, 2016. After that, the exhibition will move to the municipal museum in Schleswig and can be seen there from June 2 (opening) to October 30, 2016.

At both exhibition locations the artist will be giving talks under the title “Art Wolfe live”: on February 12, 2016 in the Park Theater Iserlohn and on June 3, 2016 in the A. P. Møller-Skolen, the Danish secondary school in Schleswig.

The exhibition and the presentations will be supplemented by the opulent photo book “Earth Is My Witness”, a German version of which will be available during the exhibition tour.

With the Art Wolfe exhibition, the Städtische Galerie Iserlohn and the Stadtmuseum Schleswig continue their successful cooperation in the exclusive presentation of major contemporary photographers. Others who have been shown to date are Steve McCurry 2008/2009, Jim Brandenburg 2011/2012 and David Doubilet 2014. 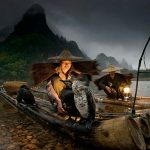 Earth Is My Witness Exhibition – Iserlohn and Schleswig 2016